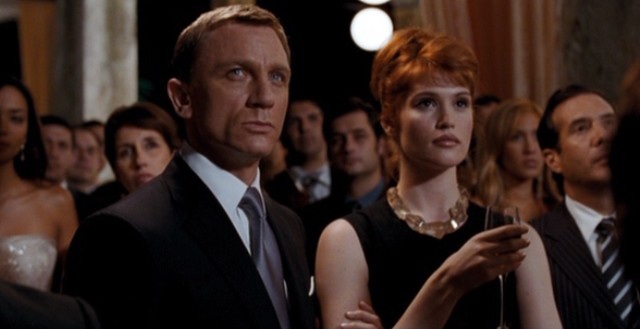 Bond 22‘s opening car chase is an interesting sequence. Excluding the studio logos, there are 205 shots across the first 2 minutes and 52.6 seconds of the movie. That’s an insane number, equating to 1.188 shots per second (or 0.842 seconds per shot). Clearly designed for a species that doesn’t blink, there are a lot of great money shots buried in the scene, but nothing will take your breath away because the total effect is one of being distanced. It’s also a chase that’s very hard to follow. Beyond such frequent cutting, there’s a lack of logical pattern connecting shot a to shot b. The 180 degree rule, for instance, would usually help the audience track a character or object across cuts by its position in the frame. One suspects it’s violated here, and other unorthodox approaches followed, with the intention of surprising the audience with each new shot. It’s ambitious but a failure.

Sadly, this editing aesthetic doesn’t let up as the film progresses. It features in every subsequent action sequence and, bizarrely, even dialogue scenes include a number of unnecessary cuts – jump-cuts sometimes. What could have been a very exciting film is ruined by the misguided efforts to make it more so. But it’s not substantially terrible. Following Casino Royale‘s formula, the threadbare plot launches Bond from one action sequence to another, undercover and on the run as he pursues the mysterious but powerful baddies. It’s formulaic but varied, fun in of itself and it looks good. The finale lets the piece down (“It’s just the fuel cells. The whole compound runs on them.” “Sounds highly unstable” *long pause*), but it’s the overall execution that’s the real flaw in what could have been a much better received blockbuster.