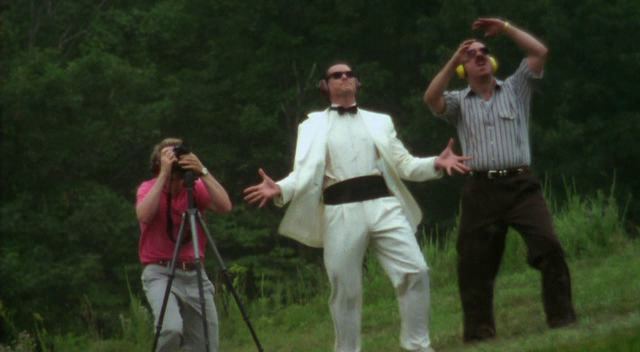 A little while ago I decided to have an obsession with Paul Schneider, the actor of supporting roles in The Assassination of Jesse James, Away We Go and Parks and Recreation. There wasn’t any particular reason, just an out-of-nowhere nagging  “Who’s that actor and what the hell have I seen him in?” After some intense imdbing, I landed upon his page and discovered that he had in fact in 2008 directed an independent film. From just five reviews on Rotten Tomatoes, it holds a 20% rating. Why, David (I mused), if I’m to cultivate an amusing Paul Schneider fixation, I HAVE to track down this film. So I did. And I watched it.

What’s surprising is… is it’s… good! A fictionalised account of a mad attempt to build a rocket belt (aka jetpack), Billy Crudup plays the literally washed up dreamer Curtis Prentiss who manages to convince investors including friend and mattress store owner Kenny Owenby (It’s Always Sunny in Philadelphia‘s David Hornsby), and unemployed rocket technician Rick Honeycutt (Paul Giamatti on indie duty once more) to join his venture. The first half is a treat, holding delightful characterisation and performances to go with it. The inevitable Yoko Ono phase is unfortunately drawn out, and the conclusion is surprising without really feeling like an ending, but it’s definitely a pity the film didn’t get theatrical distribution. Meanwhile, I hear you ask, will Paul Schneider direct again? I await the answer with as much anticipation as you, friend.