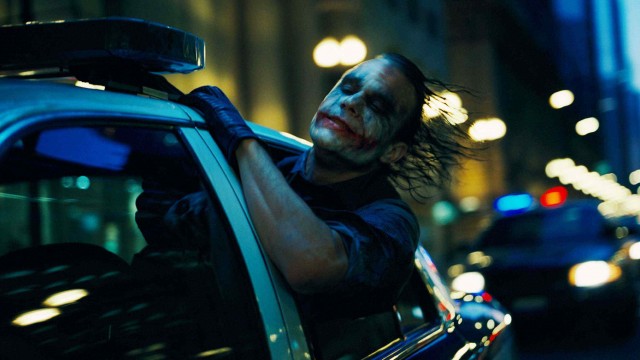 The Dark Knight is a different beast to its predecessor. Visually, its not just Rachel Dawes whose appearance is altered. Gone are the hallmarks of Gotham’s alternate reality, the production team opting for an anonymous metropolis, no doubt aiming for the film’s themes to resonate with our own world more sharply. The film builds itself up much more gradually too. With big things in store the film reaches ridiculous levels of angst, which is a real pity because while Begins managed to have a great deal of fun, there isn’t any in Knight. Not one iota.

In its own right this isn’t a problem because, while the superhero genre may be inherently silly, it is one which can tap into all sorts of real issues – see X-Men, Watchmen, et al. The Dark Knight, meanwhile, has all the subtlety of Cthulhu’s dick. Without fun, it’s all out in the open to see: this film isn’t clever either. Witnessing its pretence is like watching a 6-year old attempt to operate a tommy gun. Speaking of which, Batman’s gadgets push out significantly further from plausibility. When theme and technology are tied in one development towards the end of the film, the sheer cumulative implausibility would cause the 9th reincarnation of Jean fucking Grey to roll her eyes.

Elsewhere the editing is often lacklustre and confused, and The Joker – that celebrated villain – is a walking “deus-ex” machine. Camera and music frequently have to compensate for Heath Ledger’s fundamentally flawed performance. The actor’s misguided attempts to raise the fear level into overdrive backfire. His… antics(?) and mannerisms are not unpredictable-scary. They are rather quite predictable and familiar, and all that’s left is a clown backed by plot contrivance.

The score is good, mind.